The man behind the Mic

Richard boasts a truly mixed heritage - West African, West Indian, and South American. He grew up in the military, his Father serving all over the world with the Royal Air Force. Hannah flirted with a serious career in the military himself before cross training to law and then to IT.

The young Richard Hannah, excelled academically as well as in Sport, Music, and Drama. He represented England Schools at Athletics, played Chess to County Standard, showed early talent as a French Horn Player and Vocalist.

Living in La Nucia, Valencia Spain - he is married to Lorraine has a daughter who has given him two grandchildren, four Stepchildren, he is close to with a further five grandchildren. He lost his parents in the nineties and tragically lost his Son at 35 in January 2022.

He maintains parallel careers as both a much in demand Executive Consultant with a top global consultancy. He is also an award-winning Radio and TV broadcaster/producer.

As if Radio Broadcasting was not enough, Hannah enjoys live performance. By the time he was eighteen was already on the circuit as a comedian and club compere, supplementing the ‘day job.’  He is a capable vocalist, whose standard set is peppered with show tunes and a Sammy Davis Jr vibe. Hannah has sung in major venues all over the world. Best Selling Author, and long-time friend, Adrian Webster described him as 'fearless'. In an already full life Hannah still finds time to take part in Charity Shows, Festivals and has even performed on the odd Cruise Ship. He is a regular on the Spanish live music circuit.

Combining the skills of the live performer, comic, and businessperson, unsurprisingly Hannah is a much in demand major conference facilitator and Speaker.

Hannah has been a Voice Actor, TV Voice Over and worked across independent radio. He is a trained video director, Scriptwriter and producer who has delivered thousands of hours of corporate TV, Training materials and TV ads. Notably he won awards in Education for a pioneering prospectus (utilising animation) and penned an award-winning education campaign for London Colleges.

A self-confessed technology nerd, Hannah was an early internet radio broadcast pioneer. He developed one of the first net-based radio stations, creating new file compression techniques to get around issues on the internet in the 1990s. The stations he created were heard in fifty-three different countries, including China.

Behind, the mike, Hannah’s relaxed tongue in cheek style has seen him host dozens of successfully syndicated radio shows., including:

Hannah is currently presenting a new season for Local Regional News Shows for KLR247 called 'Week In, Week Out'  8am every Monday.

Week In, WEEK Out 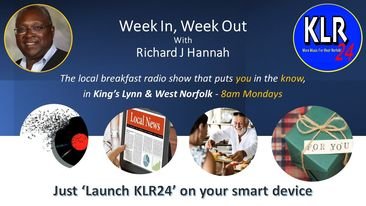 'Week In, Week Out' is the new Weekly Magazine for KLR247 from award winning broadcaster, Voice Actor and former Sky TV presenter, Richard J Hannah. It is a weekly review of local news, a tongue in cheek looks at the top stories. It features, 'What's on' an eclectic mix of music, chat, and dedications. There are regular features like 'three in a row', and 'too good, too bad'. The show will contain advertising .

Contact or leave a message for interviews or details of his latest endeavours. Richard has begun broadcasting again with his KLR247 show - 'Week In, Week Out' starting a brand new season on 26th June 2022